Baby Gibson is a character who appears in Diary of a Wimpy Kid: The Meltdown. He lives in the same neighborhood as Greg and Rowley, and it's also said that he lives with his grandmother (it's never explained who his parents are or what happened to them). According to Greg, no one knows for sure just how old Gibson is, because no matter how much time passes, he never seems to get any older. In fact, as Greg notes, as far as anyone (including Greg himself) knows, "Baby" Gibson could easily be an adult with kids of his own. He appears in Wrecking Ball as a cameo at the Heffleys' moving party.

Baby Gibson in the yard.

Greg and Rowley enter Baby Gibson's fort, due to them thinking that there was no one in it.

Greg, Baby Gibson and Rowley attacking kids with snowballs during the snowball fight.

Baby Gibson, Greg and Rowley are shocked to see one of Mrs. Jimenez's playgroup's children has popped up in their fort.

Baby Gibson shaken up after he reads the note.

Baby Gibson biting someone in the Battle of Surrey Street. 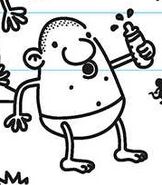 Baby Gibson in Wrecking Ball.
Add a photo to this gallery

Retrieved from "https://diary-of-a-wimpy-kid.fandom.com/wiki/Baby_Gibson?oldid=166357"
Community content is available under CC-BY-SA unless otherwise noted.