Archie signs up to be a tree, along with Greg Heffley and another kid. During one play rehearsal, he trips over a boy named Rodney James and chips his tooth because he couldn't use his arms to break his fall due to his costume. As a result, the school lets the tree actors carve arm holes in their costumes.

When Greg's brother Manny calls him "Bubby" during the play, Greg deflects the attention to Archie by calling him by that nickname. He sings the first few lines of the song "We Three Trees" before realizing Greg isn't singing. He stops singing as well, which Greg believes is because the other trees think he knows something they don't. After Greg throws an apple at Patty Farrell, the other trees join in as well, which leads to the play being shut down after someone breaks Patty's glasses.

The day after the play, Greg spots him being hassled by some bullies about the "Bubby" nickname after fifth period and begins to breathe easy again.

He also appears in the second movie when Greg starts the Invisible Chirag joke. Greg redirects his name into Archie Kelly and said "I think you dropped an apple, Bubby." during The Wizard of Oz play.

A bully shoves Archie Kelly and says "Hi there, 'Bubby'!".

Archie Kelly in a tree costume in the Diary of a WImpy Kid movie. 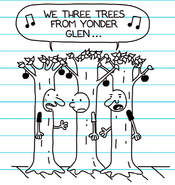 Add a photo to this gallery
Retrieved from "https://diary-of-a-wimpy-kid.fandom.com/wiki/Archie_Kelly?oldid=159655"
Community content is available under CC-BY-SA unless otherwise noted.