Abigail Brown is a character in The Third Wheel and the main antagonist of Hard Luck. Rowley hooked Greg up with Abigail for the school's Valentine's Day Dance, after hearing that her date, Michael Sampson, had "family obligations".

In The Third Wheel

Abigail appears as the secondary antagonist in the Third Wheel. When Rowley gives Greg the news that Abigail and Michael Sampson split three days before the school dance, Greg immediately takes his chances of going with her to the dance. However, he gets an idea to use Rowley as a wingman, not knowing Abigail.

After facing a decision to have Robert Jefferson chauffeur the three to the school dance and arriving at the Brown family's house, Greg waits while Mr. Brown, a state trooper, watches him.

Rowley and Abigail take a shine to each other on the way to dinner. Greg tries to make sure that she doesn't run off with Rowley by telling her that Rowley wasn't trying to be funny when he asked Abigail if he wanted a sip of a drink he'd been drinking.

In the middle of the dance, Michael Sampson comes in with Cherie Bellanger, and Abigail starts crying because she found that the family obligations story was a lie and that Michael broke up with her. After she goes to wash her face, Greg invites her to dance, but Greg freaks out when he sees a pimple on Abigail's face, and thinks that it's chickenpox, this saddened Abigail and ruined any chances Greg had with her.

By that time, Abigail must have only liked Greg as a friend. But after what happened with the "Chicken Pox" thing, she must have hated Greg ever since.

It is later mentioned by Greg that Abigail does run off with Rowley. This leads Greg to say that Rowley is the worst wingman ever if it was true, thus screwing him over of his date.

Abigail is the main antagonist in Hard Luck. She and Rowley are revealed to be a couple in this book. This causes Rowley to start dressing and behaving differently much to the disdain of Greg. They are voted as Cutest Couple in the yearbook and Greg resigns as a yearbook photographer, as he has had enough. However, at the end of the book, Greg hears that Rowley and Abigail are no longer a couple and Abigail is back with Michael Sampson.

It's implied that Abigail was never into Rowley in the first place and was only dating him to try and make Michael jealous—even if Rowley was kind of a jerk to him for most of the book, Greg felt bad for Rowley and also felt that the way Abigail broke up with Rowley was kind of harsh. However, after Abigail breaks up with Rowley and gets back together with Michael, Greg and Rowley patch things up and become friends again.

Abigail Brown talks to the Dance Committee during the meeting that she is upset because she was supposed to go to the Valentine's Day Dance with Michael Sampson but he has a family obligation and he has to cancel her, resulting Abigail that she has a dress and she can't find people to the dance with.

Abigail with Greg and Rowley.

Greg, Abigail, and Rowley walking down the pavement towards Spriggo's.jpg 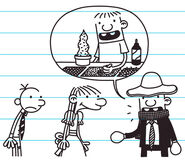 Greg and Abigail are waiting for their turn to take a photo of Midnight In Paris. 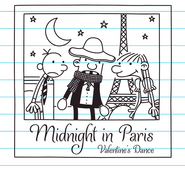 Abigail, Greg and Rowley in the Midnight In Paris photo.

Abigail with her friends

Abigail finds that Michael cheated on her about the family obligations story.

Greg and Abigail slow dancing during the Valentine's Day Dance.

Greg screams at Abigail because of the chickenpox.

Abigail Brown is upset on the way home because she is teased for the chickenpox after the Valentine's Day Dance as Rowley is comforting her.

Abigail walks home with Rowley holding hands together after they alighted from Jefferson Family's Car.

Greg is overhearing that the girls are talking about Abigail Brown and they heard that she is back with her old boyfriend, Michael Sampson.

Abigail, and Michael got back together in Hard Luck. 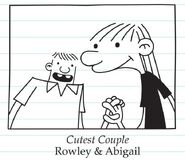 Add a photo to this gallery
Retrieved from "https://diary-of-a-wimpy-kid.fandom.com/wiki/Abigail_Brown?oldid=165288"
Community content is available under CC-BY-SA unless otherwise noted.